Abortion and the Racist and Sexist Charles Darwin 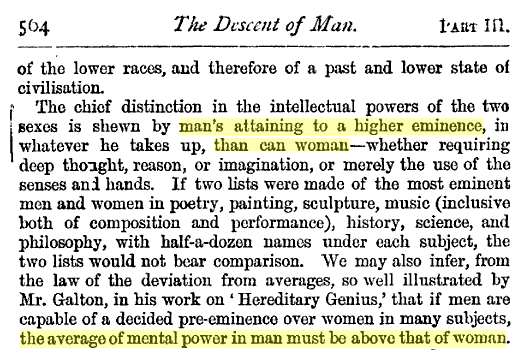 "The chief distinction in the intellectual powers of the two sexes is shewn by man's attaining to a higher eminence, in whatever he takes up, than can woman—whether requiring deep thought, reason, or imagination, or merely the use of the senses and hands. If two lists were made of the most eminent men and women in poetry, painting, sculpture, music (inclusive both of composition and performance), history, science, and philosophy, with half-a-dozen names under each subject, the two lists would not bear comparison. We may also infer, from the law of the deviation from averages, so well illustrated by Mr. Galton, in his work on 'Hereditary Genius,' that if men are capable of a decided pre-eminence over women in many subjects, the average of mental power in man must be above that of woman."

-Charles Darwin, The Descent of Man, p. 564
(And see a 2020 peer-reviewed paper about Darwin's
view on women and how he thereby hurt society.) 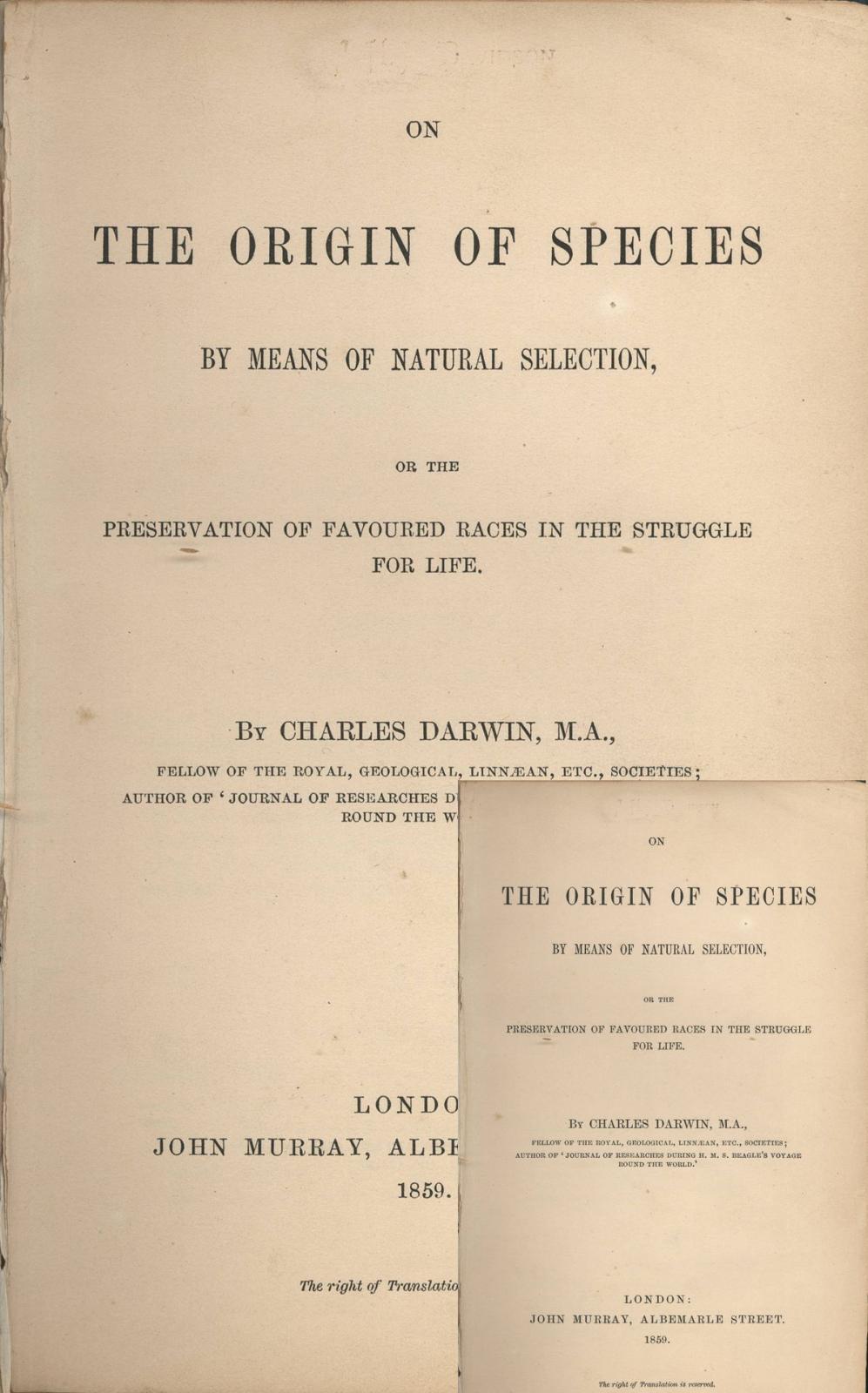 Later editions of Darwin's Origin of Species dropped the phrase "Favored Races" from the book's title. But then in his second book, after asking whether man has given rise to races that "must be classed as doubtful species", Darwin ominously wrote:

"At some future period, not very distant as measured by centuries, the civilised races of man will almost certainly exterminate and replace throughout the world the savage races. At the same time the anthropomorphous apes, as Professor Schaaffhausen has remarked, will no doubt be exterminated. The break [between humans and non-humans] will then be rendered wider, for it will intervene between man in a more civilised state, as we may hope, than the Caucasian, and some ape as low as a baboon, instead of as at present between the negro or Australian [aboriginal] and the gorilla."

Darwin's racism and sexism have been enormous factors in the killing of unborn children and in the forced sterilization, and worse, of many others. In reality, babies are not made in the image of apes but in God's image. Countless scientific observations show that Darwinism itself is false. And historical observations show that Darwinism is dangerous. For while evolutionists resist the documented reality, Darwin's  immediate and extended family were instrumental, with his support, in the development of the eugenics movement. In addition to its inhuman influence on public policy in Australia, China, Germany, and Russia, consider America's own crime against humanity, motivated by Darwinian eugenics, of the forced sterilization of over 60,000 people which was upheld by America's courts as late as 1942 when the U.S. Supreme Court absurdly ruled in Skinner v. Oklahoma that the equal protection clause of the constitution would not be violated as long as forced sterilization of prisoners included white-collar criminals.

Cambridge Professor's Prediction Fulfilled: Through abortion, eugenics, and other Darwin-inspired genocides, humanity, if it is not too generous to call it that, has fulfilled the prediction of Cambridge University's professor of geology Adam Sedgwick, who wrote to his former student Charles Darwin:

Passages in your book... greatly shocked my moral taste. ... There is a moral or metaphysical part of nature... A man who denies this is deep in the mire of folly. ...  You have ignored this link... If I do not mistake your meaning, you have done your best in one or two pregnant cases to break it. Were it possible... to break it, humanity in my mind, would suffer a damage that might brutalize it—& sink the human race into a lower grade of degradation than any into which it has fallen since its written records tell us of its history.

Eugenics and the Darwin Family Tree: Following his doctrines of the tree of life, natural selection, and "survival of the fittest" (the phrase he later added to his cover), Charles Darwin's cousin (Francis Galton, who coined the term eugenics and founded the pseudoscience), Darwin's grandfather, and father, all promoted eugenics. Darwin is commonly quoted by evolutionists denying that He would apply his theory to human beings. But in Origin of Species, he extrapolated laws of insect behavior for the benefit of all organic beings. Beings? Animals are more commonly referred to as organisms. For Darwin wrote, "[I]t is far more satisfactory to look at such instincts as... ants making slaves... not as specially endowed or created instincts, but as small consequences of one general law, leading to the advancement of all organic beings, namely, multiply, vary, let the strongest live and the weakest die."

Of course that pails in comparison to the more than 55 million children killed by abortion in America. And in Communist China abortion has resulted in a boy-to-girl birth ratio of 120 boys born to every 100 girls, evidence of the intentional over-slaughter of tens of millions of girls. And in America, racism, especially the disdain for blacks, has been a leading motivation of the growth and promotion of Planned Parenthood. Life Dynamic's Mark Crutcher produced what is so far the most important documentary of the 21st century, Maafa 21, which is a must-see for anyone who refuses to be part of the apathy and ignorance that is destroying millions of black families.

"We Don't Know When Life Begins" Ten thousand times over the Roe v. Wade opinion has been quoted approvingly by those who advocate the killing of unborn children. That opinion, passed by a Republican majority and authored by Republican justice Harry Blackmun, claimed in Section IX, "We need not resolve the difficult question of when life begins." Of course, scientifically speaking, biologists (and much of the world) have long known when life begins. See ARTL's The Beginning of Biological Life. Regarding Darwin, it turns out that many "pro-choicers" are also evolutionists. Darwinists themselves should ask the Denver Museum of Nature and Science to correct a misleading exhibit headline which refers to the 1952 Miller/Urey experiment which synthesized amino acids. The museum's exhibit is titled: Replicating Life in the Lab? It’s been sixty years! Don’t they know yet if they made life or not? Their question mark is insufficient to counterbalance this false report, since amino acids are building blocks of biological life, but they are not life. They're acids. So realize the contradictory views held by so many pro-aborts: 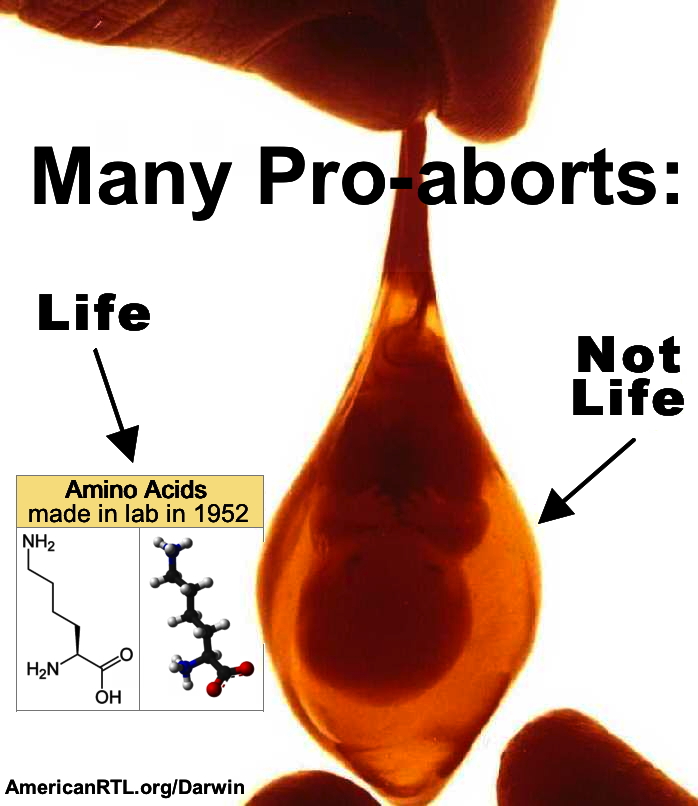 * Darwin on the Bible and the Afterlife: "For myself, I do not believe that there ever has been any revelation. As for a future life, every man must judge for himself between conflicting vague probabilities", p. 307, The Life and Letters of Charles Darwin. Decades after he tragically published his Origins, he denied being an atheist, writing, "an Agnostic would be the more correct description of my state of mind." Today, aggressive atheists  like Richard Dawkins have tricked a gullible media and public into believing that Darwin's insights empowered them to produce a theory for origins that makes the existence of a Creator God unnecessary. However, atheists do not even have working hypotheses, let alone a theory, for the most extraordinary features of the cosmos. For example, for human consciousness, they have no theory, let alone a robust theory. The following pattern, found in the widely accepted materialist claims on orgins, shows that atheists do not have even a hypothesis on origins, as demonstrated by these six irrefutable observations:
- the origin of species for Darwin begins with species already in existence
- the origin of stars begins with the explosion of existing stars and with protostars
- the origin of genes that code for new proteins begins with modifying existing genes
- the origin of species by neo-Darwinism begins with existing complex reproducing life
- the origin of life on earth is increasingly seen as seeded from already existing alien life
- the origin of the universe is increasingly explained by appeals to the pre-existing multiverse.

This pattern demonstrates that many in the public, following a gullible media, have undue confidence in the claims about origins from materialists. (For more on this, see RealScienceRadio.com/origins.)

See also AmericanRTL.org/Einstein and our Regulations page. And you're invited to watch online Focus on the Strategy II. And remember, we are the makers of the world's largest protest sign against Barack Obama and the Democrats for destroying unborn children.