Updated June 2017 -- NCI Researcher Now Agrees: Louise A. Brinton, largely responsible for getting the government-funded NCI to deny the abortion-breast cancer link, has reversed herself and co-authored a new study which now describes significant breast cancer risk factors including "induced abortion."\ "Specifically, older age, family history of breast cancer, earlier menarche age, induced abortion, and oral contraceptive use were associated with an increased risk for breast cancer," wrote Brinton and her co-authors in the peer-reviewed Cancer Epidemiology journal of the American Association for Cancer Research. The study also says that these risk factors are "consistent with the effects observed in previous studies on younger women." (See "Risk Factors for Triple-Negative Breast Cancer," Brinton, et al., American Association for Cancer Research.)

Second NCI Scientist to Confirm Abortion Link: "Pro-choice" Janet Daling has reported that "[A]mong women who had been pregnant at least once, the risk of breast cancer in those who had experienced an induced abortion was 50 percent higher than among other women."

Endocrinologist Being Vindicated: Endocrinologist Dr. Joel Brind of Baruch College in New York City is the original dissenter at the NCI's conference that rejected the abortion link to breast cancer. In Dr. Brind's report on this NCI researcher's paper, read about another finding reported by Brinton, the 320% increase in risk for women taking the birth control pill to develop TNBC, Triple Negative Breast Cancer, a particularly aggressive and treatment-resistant cancer. Learn more also at AbortionBreastCancer.com and see a 2011 update regarding Johnson & Johnson below. 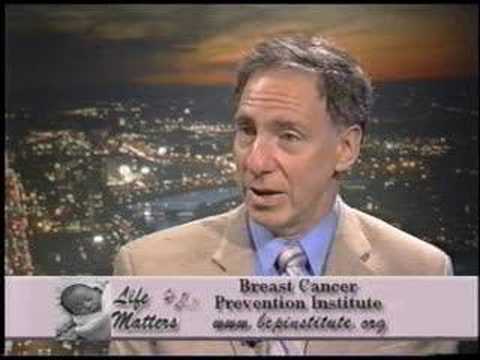 Hear Dr. Brind address these developments in the last few minutes of this Denver radio broadcast:

Another NCI-funded Research Admitted Link: Janet Daling, et al., in the Journal of the Nat'l Cancer Institute, earlier acknowledged that, "Among women who had been pregnant at least once, the risk of breast cancer in those who had experienced an induced abortion was 50% higher than among other women... Our data support the hypothesis that an induced abortion can adversely influence a woman's subsequent risk of breast cancer." Daling is quoted in the L.A. Daily office [at] AmericanRTL.org. Thx! ">saying, "I would have loved to have found no association between breast cancer and abortion, but our research is rock solid and our data is accurate."

Nov. 2012 Update: Two more studies, as reported in the Asian Pacific Journal of Cancer Prevention, on a combined group of more than 2,000 women, show induced abortion as a significant risk factor for breast cancer.

Aug. 2014 Update: A review of a dozen studies shows that the abortion breast cancer link explodes in Asia.

Denver, Colorado -- A meeting last Friday between Komen Breast Cancer Foundation's Denver officials, CRTL board members, and scientific and medical experts led the pro-life organization to decide to join an annual protest to warn women at the Komen Foundation's Race for the Cure of the link between abortion and breast cancer.

Former Komen medical research analyst Eve Sanchez Silver explained to the Komen officials that she resigned from Komen two years ago because the organization denies the scientific studies showing the link between abortion and breast cancer, and it provides funding to abortion provider Planned Parenthood.  Professor Joel Brind, PhD endocrinologist from Baruch College in New York City attended the meeting after saying on Denver radio that, "the 2003 conference of the National Cancer Institute which denied abortion as a risk factor for breast cancer refused to allow attending scientists to present the opposing position of the scientific research establishing the link, showing that abortion was declassified as a cancer risk for political and not scientific reasons."

Further, "The NCI's own statistics show that breast cancer has increased, and only in women who were of child-bearing age when abortion was legalized in 1973, so much so that nationally, cancer would have steadily declined, except it has held steady at the expense of women getting breast cancer," said Dr. Brind. 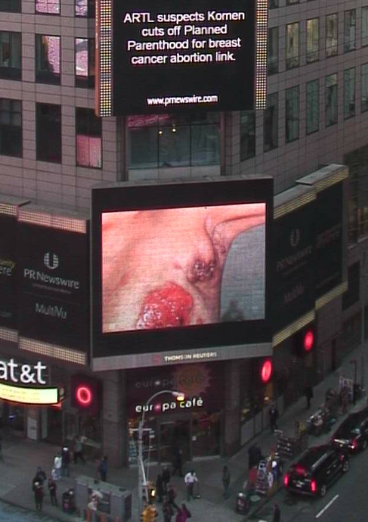 Komen Denver board member and chairman of the grants committee, J.P. Pedinielli, and public relations representative, Dana Brandorff, attempted to dissuade CRTL from protesting at the Race arguing that "Planned Parenthood is not a current grantee" of Komen's Denver chapter, and when challenged, added that Planned Parenthood, "might have been a previous grantee."  CRTL vice president Leslie Hanks then documented the continued local funding of the abortion provider throughout this decade.  Eve Silver* showed from Komen documentation that the national organization has given as much as $475,000 in a single year to abortion-provider Planned Parenthood.

"Even if abortion proved beneficial to a woman's health," said Hanks, "government should still prohibit the killing of an innocent human being, because abortion is always wrong."

Prof. Brind corrects a factual error on the Komen.org website, that "the breast is mature after puberty," stating that "Third trimester pregnancy hormones begin the final maturation process and the differentiation of mammary gland cells.  Abortion prevents this, leaving the woman with more undifferentiated cells vulnerable to carcinogens, increasing her risk of breast cancer."

As transcribed from a recording of the meeting, CRTL asked, "Why aren't women being told about the most preventable risk factor?" to which Komen's Brandorff answered, "We tend to focus on the cure... we're focusing our energies on that, rather than the preventative."

Does Miscarriage Increase Cancer Risk? In a 2011 email to an ARTL spokeswoman, Karen Malec, president of the Coalition on Abortion/Breast Cancer wrote: Most miscarriages do not raise breast cancer risk because most are abnormal first trimester pregnancies without the surge in hormones that accompanies normal pregnancies. If the mother is not being overexposed to estrogen while it's in the presence of progesterone, then her cancer-susceptible lobules are not being stimulated to multiply. Her breasts aren't being stimulated to grow, and she's not growing more places for cancers to start. By contrast, most abortions are normal pregnancies which have elevated pregnancy hormone levels that stimulate breast growth. Second trimester miscarriages and early premature births before 32 weeks gestation also raise breast cancer risk." See more of Malec's work at archive.org.

Johnson & Johnson Warned of 44% Increased Risk: At Johnson & Johnson's April 28, 2011 annual shareholder meeting, a co-author of a 2006 Mayo Clinic Proceedings report, testified of their published meta-analysis, that, "After reviewing all of the world's data, we found that... if women took oral contraceptives prior to the birth of their first child, which is when most women take them [that these] women incurred a 44% increased risk" of breast cancer and "that the World Health Organization had recently classified oral contraceptives as a Group 1 carcinogen - the most dangerous type known to humankind." Dr. Chris Kahlenborn, who is also a medical adviser for the ABC Coalition, presented a resolution to cease all hormonal contraceptive sales. And Kahlenborn testified further that the Frontiers of Medicine in China quoted this Mayo Clinic article and added their own meta-analysis which "found that women who took oral contraceptives sustained a 112% increased risk in developing breast cancer." The shareholders followed the corporation's board in voting down Dr. Kahlenborn's resolution, to which American RTL vice president Jefferson George said that, "Johnson & Johnson's denial and greed is comparable to that of the tobacco industry."

Why the Media Doesn't Report the ABC Link: Rebellion against God expresses itself in many ways. Promoting the intentional killing of innocent children who are made in His image and likeness is one of the strongest ways to show hatred toward God. This is why our godless culture is so pro-abortion that it will even sacrifice women to breast cancer on the the same altar on which they dismember unborn children.

This page is dedicated to Eve Silver's brother Pablo Sanchez who passed away
August 10, 2010. For years Pablo maintained the prolifejoes.com website.