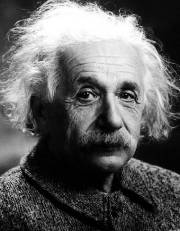 Thoughts from Albert Einstein: His collection of essays, Out of My Later Years, published in 1950, presents Einstein's statement that, "science can only ascertain what is, but not what should be," necessarily excluding from its domain "value judgments of all kinds." Thus science could not even prove that the Holocaust or the slave trade were wrong. This raises questions about the approach of some pro-life groups that say: "We don't talk about God because we're going to win this based on the laws of science." But none of the laws of science even use the terms right and wrong. Abortion is wrong because it's a baby, and it's always wrong to intentionally kill a baby, and that's because children are made in God's image and God said, "Do not kill the innocent." (And just as science cannot determine right from wrong, neither can mathematics. This inability exposes the fundamental error in utilitarianism. "The greatest good for the greatest number of people," amounts to moral relativism which has widely infected the pro-life movement.)

Realizing that science does not address moral laws, Einstein wondered even about physical laws and why it should be that mathematical ideas, which are non-physical, should correspond so well to the physical universe. In 1921 Einstein asked, "How can it be that mathematics, being after all a product of human thought which is independent of experience, is so admirably appropriate to the objects of reality?" Even though he was uncomfortable with this concept, fifteen  years later he was still wrestling with the same unshakable observation. For in 1936 Einstein famously wrote that, "the eternal mystery of the world is its comprehensibility." Then in 1944, remarking about atheist Bertrand Russell, he described the ability to get from matter to ideas as a "gulf–logically unbridgeable," which some scientists and linguists refer to as Einstein's Gulf. For while matter can be arranged to represent data, information itself is not material.

When Ronald Reagan was president, as seen from Reagan's personhood proclamation below, he put the personhood of the unborn child front and center in his pro-life efforts.

A fabulous Youtube video has been removed but is currently available at gloria.tv. It presents Ronald Reagan affirming the God-given right to life of the unborn child.

Watch ARTL's groundbreaking Focus on the Strategy I. Learn how to do your part to restore the pro-life movement and to end America’s “legalized” child killing.

“Awesome! Six hundred thumbs up!” Focus on the Strategy I was filmed before a live audience of 300 Christian activists in Denver, Colorado during a week-long citywide pro-life outreach.