Effective pro-lifers will learn key lessons from the fight in various countries to end slavery. Henry Mayer summarized his definitive biography of American abolitionist William Lloyd Garrison, All on Fire, with the excerpts below. In Garrison's day, the political power, money and influence overwhelmingly supported compromise on slavery including the colonization faction that mostly opposed fighting for abolition but instead raised money to ship willing blacks back to Africa. As today with personhood for the unborn child, various "anti-slavery movements" were actually hostile to abolitionists like Garrison who insisted on fighting for immediate emancipation and equal rights for blacks.

Unlike with abortion, the framers had written tolerance of slavery into the U.S. Constitution itself. So by human standards, Garrison's principled fight against all the pragmatic "anti-slavery but anti-abolition" compromises seemed futile. But as Martin Luther King Jr. paraphrased Theodore Parker in his "Of Justice and the Conscience" from 1853, "the arc of the moral universe is long but it bends toward justice." For truth eventually wins out. And if pragmatism means "what works," then Garrison's uncompromising moral stand was also the only true pragmatic position. Thus biographer Mayer captured this great encouragement that the personhood movement takes from Garrison, for as he wrote:

Of all the pre-war political conceptions about slavery that contended for supremacy:
- states' rights
- three-fifths clause
- Missouri Compromise
- [colonization]
- toleration but non-extension
- popular sovereignty
it was Garrison's program of immediate emancipation through the repudiation of the proslavery constitutional compromise... that prevailed.

The undeniable parallel to today's battle for the unborn appears as a pro-life industry has arisen which raises millions of dollars but opposes the personhood movement and anyone who fights for the right to life of the unborn child. The force of truth is on the child's side as it was on Garrison's side when, against all odds, his principled view won out over the more popular, compromised alternatives.

In this Garrison biography these abolitionist parallels to today's political struggle fly off every page. Those who don't learn from history repeat it. The battle within the battle, where "anti-slavery" camps fought against abolition, is reenacted today as "conservatives" regulate abortion but oppose personhood. The battlefield is the heart and soul of the pro-life movement.

In the preface summarizing his 700-page triumphal account of America's leading abolitionist, Henry Mayer could have been writing about the struggle between the personhood movement and a pro-life movement which has been hijacked and turned into an industry for financial and political gain by politicians, lawyers, and fundraisers who see opportunity only in morally-compromised exceptions and regulations:

All on Fire is a book about an agitator and its argument can be simply stated, William Lloyd Garrison, 1805-1879, is an authentic American hero who, with a biblical prophet's power and a propagandist's skill, forced the nation to confront the most crucial moral issue in its history.

He inspired... a collaboration of ordinary people, stirred by injustice and committed to each other, who achieved a social change that conventional wisdom first condemned as wrong, and then ridiculed as impossible.

He boldly coupled his demand for immediate emancipation with an insistence upon equal rights for black people, a principled stand whose moral clarity eluded every prominent political figure of his era.

Dear Pro-life Organization, you are invited to replace ARTL's name and websites with yours  to make this survey your own in the jurisdiction where you fight. A goal of ARTL's Candidate Survey is to eliminate the "wiggle room" common in typical candidate surveys. Countless pro-abortion politicians have been "rated" as pro-life by the pro-life industry. The following questions are designed to bring an end to the time when pro-lifers are commonly deceived (see examples) by our own organizations into voting for "pro-choice" politicians.

Please consider your responses to these seven questions and then send your answers to us at the contact information below. Both during the primary and during the general election campaign we mail and email voter guides out to registered pro-lifers and post the results of our candidate questionnaires online at AmericanRTL.org. We would like to hear from you before your constituents vote in your state's primary or caucus and its convention or assembly, and especially before the general election, so that voters can benefit from our Pro-life Voters' Guide. For this could be to your advantage as much as to theirs!

If you have primary opponents, they will also be responding, so please reply as soon as possible with your acceptance or rejection of these pro-life principles. We hope you will agree and answer "Yes" to each of the following fundamental moral questions. Thanks!

1.  Will you advocate that the government recognize and uphold the God-given, inalienable Right to Life for unborn children from the beginning of their biological development?

When Ronald Reagan was president, as seen from Reagan's personhood proclamation below, he put the personhood of the unborn child front and center in his pro-life efforts.

A fabulous Youtube video has been removed but is currently available at gloria.tv. It presents Ronald Reagan affirming the God-given right to life of the unborn child.

Watch ARTL's groundbreaking Focus on the Strategy I. Learn how to do your part to restore the pro-life movement and to end America’s “legalized” child killing.

“Awesome! Six hundred thumbs up!” Focus on the Strategy I was filmed before a live audience of 300 Christian activists in Denver, Colorado during a week-long citywide pro-life outreach.

After learning the lessons from ARTL's groundbreaking Focus on the Strategy II which exposes the 40 years in the wilderness of failed pro-family tactics, now we're better equipped to strategize effectively as we do in ARTL's Focus III to implement the three-pronged strategy that can lead to the end of child-killing in our lifetimes!

Endorsement: "This is one of the BEST articles I've ever read! Thanks Juda Myers for alerting me to it... I really appreciate good thinking! WOW!!!" -Rebecca Kiessling

Abortion Purists vs. Consenting to the Killing of Some

Clickable Contents: Because there are so many clichés used trying to justify abortion regulations, we provide a clickable table of contents so you don't need to read this whole article. We recommend the Introduction and Hostage Takers sections, and then the clichés you yourself have used or heard.

Just click for our main article on States' Rights & Abortion.

Across the country, there is a growing effort to place ballot initiatives before the voters that, if successful, would legally establish the personhood of the unborn child. Such citizen-led campaigns are already being carried out in several states, and more are in the planning stages.

We have also seen this Personhood Movement challenged by some pro-lifers who insist that we should, instead, concentrate our efforts on overturning Roe v. Wade. …I was called by a state pro-life leader who was adamantly pushing this approach. His contention was that such a strategy has a much higher probability of success and would accomplish the same result. The reason for his call was to ask me to join his group in discouraging the personhood initiative in his state. I declined.

Both the fifth and 14th Amendments create a constitutional right to life for all "persons" as well as a federal duty to protect those lives. Therefore, if the Court were to overturn Roe on the basis that the unborn child is a person, their lives would be protected by the Constitution and this nightmare would be over. However, most legal experts feel that the Court is far more likely to overturn Roe on the basis that the Constitution is silent on abortion and that it is, therefore, a "states' rights" matter.

That would be an unmitigated disaster for the unborn.

With Mississippi's Personhood Amendment 26 vote coming on Tuesday, Nov. 8th, we remember this...

NBC's first-ever pro-life Law & Order episode, titled Dignity, is excerpted below. We urge against watching this immoral and soft-porn series, but this episode is pastor-approved and you can view it online!). L&O excerpts:

From Detective Kevin Bernard, played by Anthony Anderson: "You got it backwards, man. The horrible thing is the rape, not the bringing of a life into the world."

Assistant District Attorney (ADA) Connie Rubirosa says, "I grew up thinking Roe v. Wade was gospel. … But [now] I don't know where my privacy ends and another being's dignity begins."

Executive ADA Michael Cutter, played by Linus Roache, was quoting real-world surveys when he said, "The tide has turned. Most Americans are pro-life now."

Cutter virtually quoted the co-sponsor of Colorado's 2010 Personhood Amendment, Gualberto Garcia Jones, who launched the statewide ballot initiative holding his 10-day-old son at a press conference and saying, "Two weeks ago, my son had less rights than a dog or a cat." Speaking to District Attorney Jack McCoy, Cutter says, "My God, cats and dogs have more rights than the unborn." more...

Lynn Bartels of The Denver Post showcases several prominent campaign signs geared toward this year's election in Colorado. Among them is the beautifully-designed yard sign for Amendment 62.

A62 Logo Steals Show: Westword's photographer can't keep his camera lens off the stunning Amendment 62 logo! Even though the alternative rag is thoroughly pro-abortion, the newspaper's presumably "pro-choice" photo journalist did a great job promoting the Amendment 62 personhood message at Planned Parenthood's own rally! The A62 logo was prominently displayed, showing it's message without words: 62 loves the baby, showing an unborn child in the womb. Also shown is a pro-life Abe Lincoln look-alike who worked for years at Mt. Rushmore (see a pic of him there) talking to Colorado RTL office manager Donna Ballentine; Ken Scott of Pro-life Colorado holding a huge poster of an aborted child with the words Abortion is Murder; Audrey Dobson holding a a picture of a fetus that says I'm a person; and the Collaborators Project founder Will Duffy standing his ground in front of pro-aborts who were there to pose for the media.

What is abortion? Is it the removal of unwanted cells from a female’s body? Is it the simple procedure of removing a lump of tissue from a woman’s womb? According to Cal Zastrow and Keith Mason, cofounders of Personhood USA, the answer is much more disturbing.

“It is baby murder,” said Zastrow, who got his start in the pro-life movement more than two decades ago.

The leaders of American Right To Life were involved with Colorado's 2008 and 2010 Personhood campaigns from beginning to end. In the hope of hastening future victories, we are sharing some of the lessons learned with those across the U.S. fighting for the recognition of personhood. 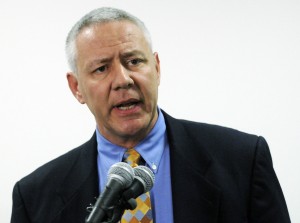 Nov. 3, 2010 Update: Regarding Ken Buck's Close 47/48 Percent Loss: After breaking every pro-life campaign promise he made including by promising to confirm pro-choice judges if elected, Ken Buck told the Amendment 62 proponents, "I'm not going to cater to personhood for 2% of the vote."

Oct. 25, 2010 Update: Buck cozying up to Mitt Romney who authorized tax-funded surgical abortion on demand as part of his Obama-like health care reform, and who now has hosted a Buck event.

"Ken Buck has already broken every pro-life campaign promise he made," said Lolita Hanks, president of ARTLA, "including that he now recanted on his promises to fight for a state pro-life amendment to protect unborn children from the beginning of their development, to introduce a ban on abortion, and to not confirm pro-abortion judges."

WorldNetDaily updates conservatives on the nationwide campaign to recognize the personhood of the unborn in states like Colorado, Mississippi, California, Missouri and elsewhere. PersonhoodUSA's Keith Mason explains how personhood is aimed at undercutting the very foundation of Roe v Wade, in which Supreme Court Justice Blackmun observed that if the personhood of the unborn were legally established, the case for legal abortion would collapse...